Check out our iPhone 13 teardown video.

There are few noticeable physical differences between the iPhone 13 Pro Max and the iPhone 12 Pro Max. One of the first noticeable differences is the smaller notch on the front side which is up to 20% smaller than previous generations. The rear camera lenses on the iPhone 13 Pro Max are much larger than iPhone 12 Pro Max in order to account for the camera improvements which we will discuss in detail in the camera section. The physical buttons on the side edge and the sim card tray are placed slightly higher compared to the iPhone 12 Pro Max. Further, same as last year, the Pro models have a stainless steel frame compared to the aluminum frame for non-pro models. 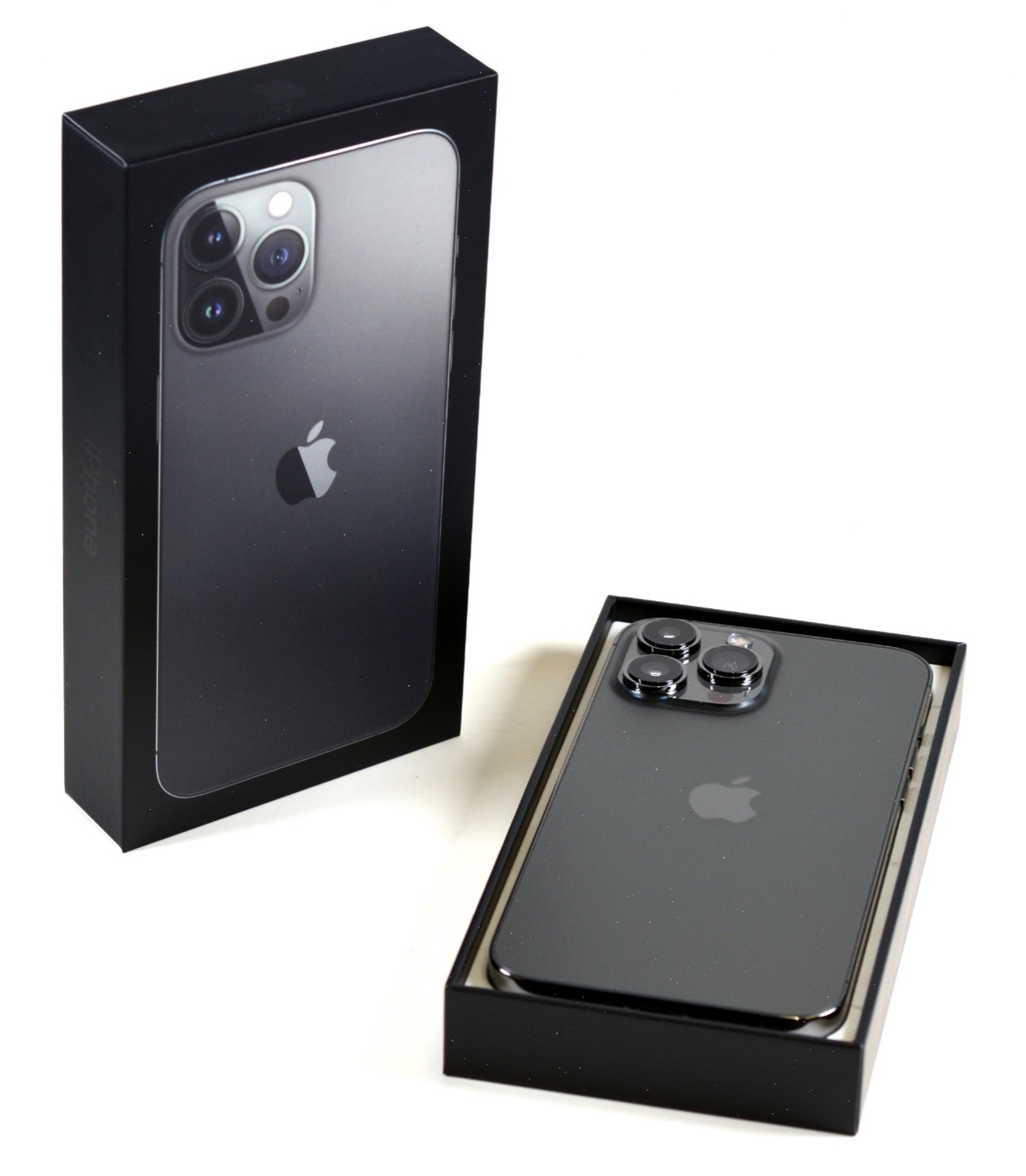 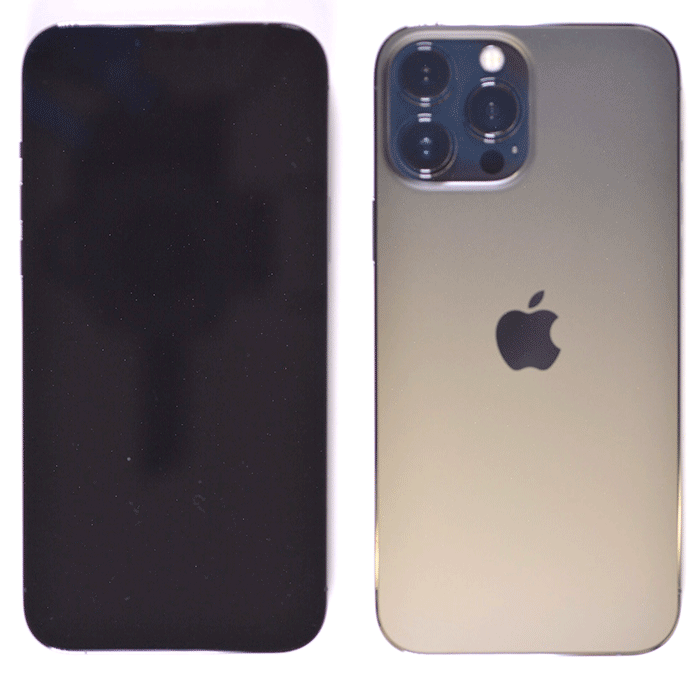 Like every iPhone (since iPhone 5) the teardown of the device is initiated by removing the display screen. The adhesive underneath the screen of iPhone 13 Pro Max was softened upon heating. The screen is separated from rest of the body using a slack to reveal the internal components such as logic boards and battery. iPhone 13 Pro Max is the first to have the processor marking sticker labelled “A15 Bionic”. 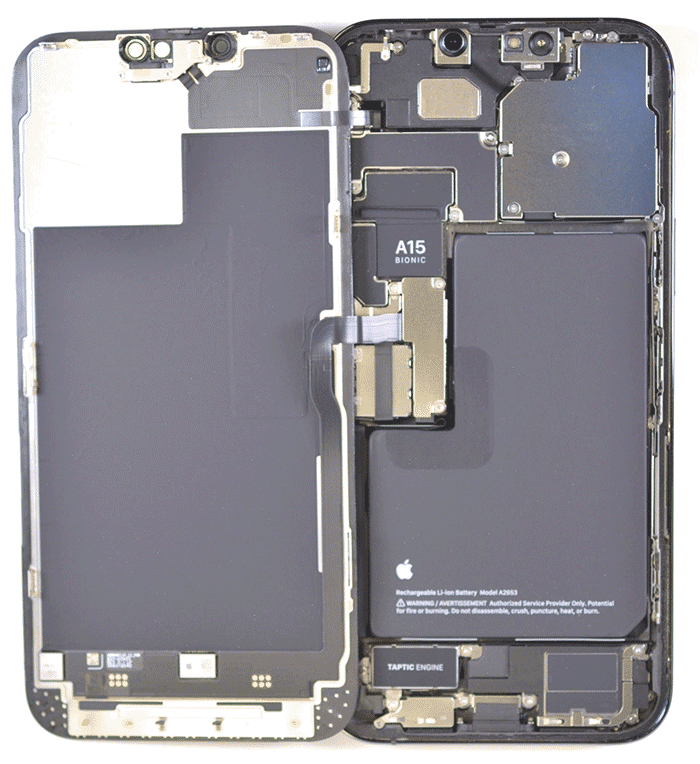 Figure 4: Removal of the screen of the iPhone 13 Pro Max 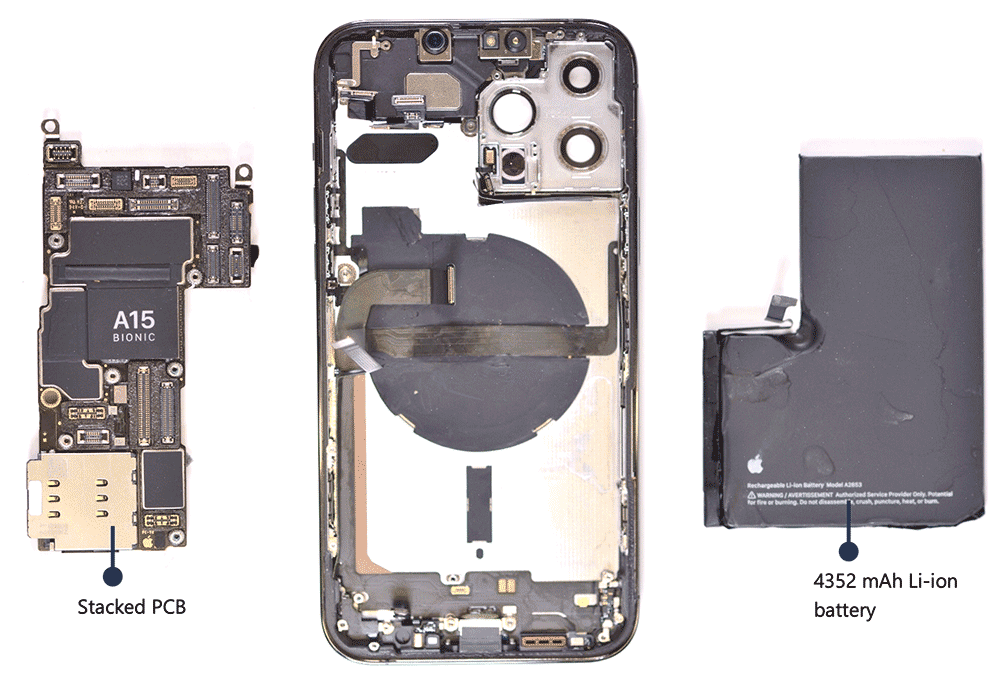 Figure 5: Removal of stacked logic boards, battery, and other components of the iPhone 13 Pro Max

The iPhone 13 lineup is powered by Apple’s A15 Bionic chip which features an Apple-designed 64-bit six-core CPU implementing ARMv8 with two high performance cores called Avalanche and four energy efficient cores called Blizzard. The A15 Bionic processor is claimed to be 50% faster than the competitors.

The A15 Bionic processor consists of 15 billion transistors as opposed to 11.8 billion transistors in A14 bionic processor and 8.5 billion transistors in the A13 Bionic chip. The A15 further includes a dedicated neural network hardware which Apple calls 16-core Neural Engine. The Neural Engine can perform 15.8 trillion operations per second, faster than A14's 11 trillion operations per second (+ 43%). The A15 also includes a new image processor (ISP) with improved computational photography capabilities. Apple also doubled the system cache to 32MB, which would deliver its own performance boost. 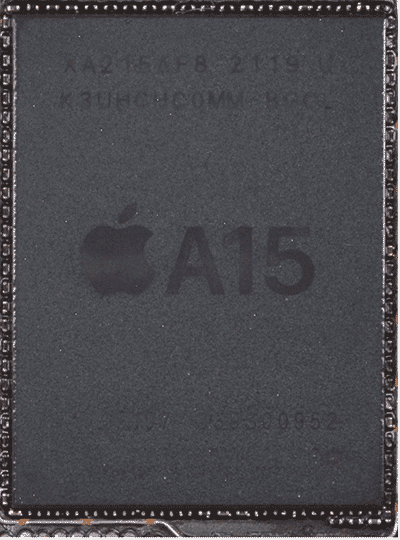 The most advanced stabilization technology on any smartphone called the Sensor-shift is now available across the entire range of iPhone 13 which was previously only present on the wide camera of iPhone 12 Pro Max. Sensor-shift stabilization is a high-end DSLR stabilization approach which applies stabilization to the image sensor rather than the heavier lens (Lens based OIS used in previous generations of iPhone) to precisely control motion in X and Y direction while maintaining sharpness. This enables to cancel both low and high frequency disturbances like hand movements or vibrations in a car.

Apple also introduces Photographic Styles which brings individual preferences into the local pipeline of image processing by applying local edits like a photo editor would but into real time as the phone renders the photo.

The tight integration between Apple’s hardware and software enables for the Apple’s new Cinematic Mode while shooting videos along with Dolby Vision HDR recording. Cinematic Mode enables iPhone 13 Pro and iPhone 13 Pro Max cameras to record videos with a shallow depth of field and add focus transitions for a cinema-grade look. 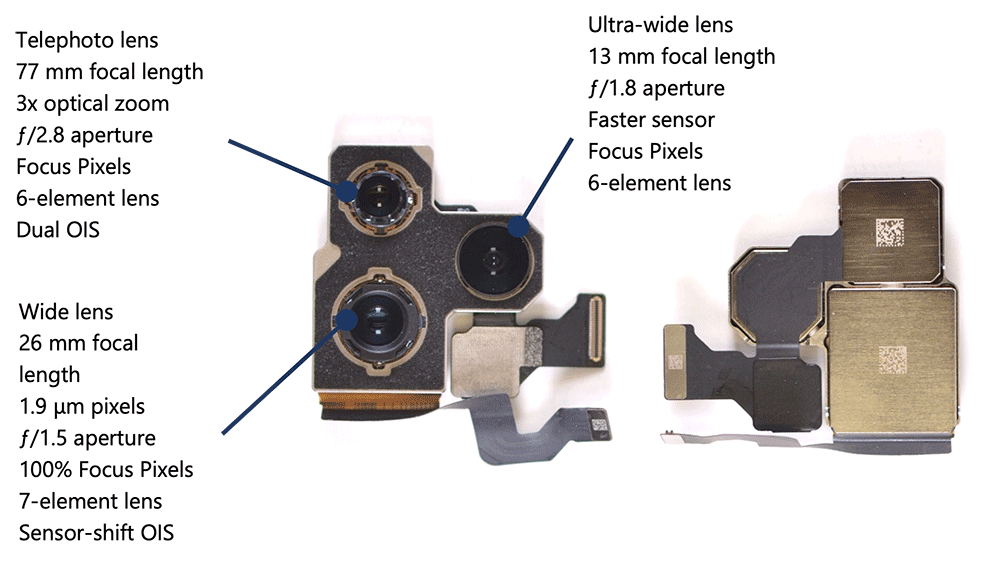 Similar to the iPhone 12 Pro Max, the front camera setup of iPhone 13 Pro Max includes a 12-megapixel camera, an Infrared camera, flood illuminator and a dot projector. The infrared camera, flood illuminator and the dot projector, also known as the TrueDepth Camera System, work together to enable Face ID on the iPhone. The Face ID system with the components described above is one of the main reasons why Apple can’t remove the notch completely from the iPhone. The selfie camera now supports Smart HDR 4 (smart HDR 3 was supported on iPhone 12 lineup), Deep Fusion, Night Mode, and night mode Portrait shots. Also, we noticed that the Face ID system and front camera is placed closer to each other compared to iPhone 12 Pro Max. This has enabled the reduction in the size of the notch in the display.

The iPhone 13 Pro Max also features LiDAR sensor introduced with iPhone 12 Pro series for enhanced augmented reality experiences and also improves camera performances drastically by enhancing low light focus, up to six times faster in low light conditions. Apple introduced night mode portrait photos starting from iPhone 12 Pro series thanks to the presence of LiDAR sensor which enables advanced depth mapping technology. The LiDAR sensor is present at the back of the iPhone 13 Pro Max near the camera lenses, about the same size as the flash. The rear LiDAR sensors work up to a range of 5 meters. This LiDAR sensor seems similar to the one present in the last generation devices. 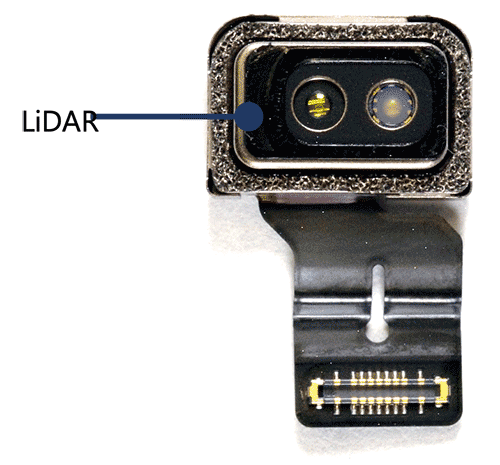 After Apple implemented 5G technology in their iPhones last year, they improved the 5G connectivity in the new iPhone 13 series. The iPhone 12 lineup last year had support for the most 5G bands (sub-6 GHz, FR1) compared to any other smartphone (see Table 1). Keeping the same tradition this year around, Apple has topped the supported band list with even more new 5G bands, amounting to total of 21 5G NR bands in iPhone 13 Pro Max. For the iPhone 13 models, the supported frequency bands will change based on the geography that you are in, and you can find the frequencies supported by the new iPhone models in your region from Apple website. Same as last year, the USA models provide support for the super-fast 5G mmWave (5G NR, FR2) which provides a higher bandwidth and much higher download/upload speeds. The iPhone 13 series now has support for a new mmWave frequency i.e., n258 (26 GHz) in addition to existing mmWave frequencies n260 (39 GHz), and n261 (28 GHz) in the last generation devices. The iPhone can dynamically switch between the Radio Access Technologies (RAT) based on the user requirements and Radio Access Technology available.

The cellular capability of the iPhone 13 lineup is powered mainly by Qualcomm, same as last year. The teardown of iPhone 13 Pro Max reveals that Apple is using Qualcomm’s Snapdragon X60 5G modem along with PMX60 PMIC which are very likely to be shared among the iPhone 13 lineup. The teardown further reveals that iPhone 13 Pro Max is equipped with Qualcomm SDR868 RF transceiver for 5G NR (sub 6 GHz, FR1), LTE and legacy RATs, which is a part of Snapdragon 888 5G Modem-RF system. The last year’s iPhone was based on Qualcomm’s Snapdragon 865 5G Modem-RF system which comprised SDR865 RF transceiver and X55 Modem.

Further, same as last year, the teardown reveals the presence of Qualcomm SMR526 5G mmWave IF (intermediate frequency) module. The SMR526 IC is part of the 5G mmWave system (5G NR - FR2) and provides the intermediate frequency for the two 5G mmWave antenna modules; one identified at the back of the PCB stack (integrated) and other one at the side of the phone. The placement of these mmWave modules is same as last generation iPhones. Though, the 5G mmWave system is expected to be based on Qualcomm’s 3rd Generation mmWave system, the antenna modules are visibly very different from the Qualcomm’s reference modules. The antenna module (Antenna 1) integrated on the back of the stacked PCB has different antenna element dimensions which probably amounts to additional frequency band support. The antenna module at the side edge of the device (Antenna 2) appears to have antenna elements with a different structure compared to the previous generation side antenna. The antenna elements appear to have a 3D structure which fits into the side edge panel like a Lego. It will be interesting to see these structures in detail once we look inside the modules.

iPhone 13 Pro Max has a similar cut out for the mmWave Antenna 2, below the power button on the right side of the mobile device. The mmWave antenna 1 is present on the stacked PCB structure and has a cut out on the chassis facing the back side as it radiates from the back of the smartphone. 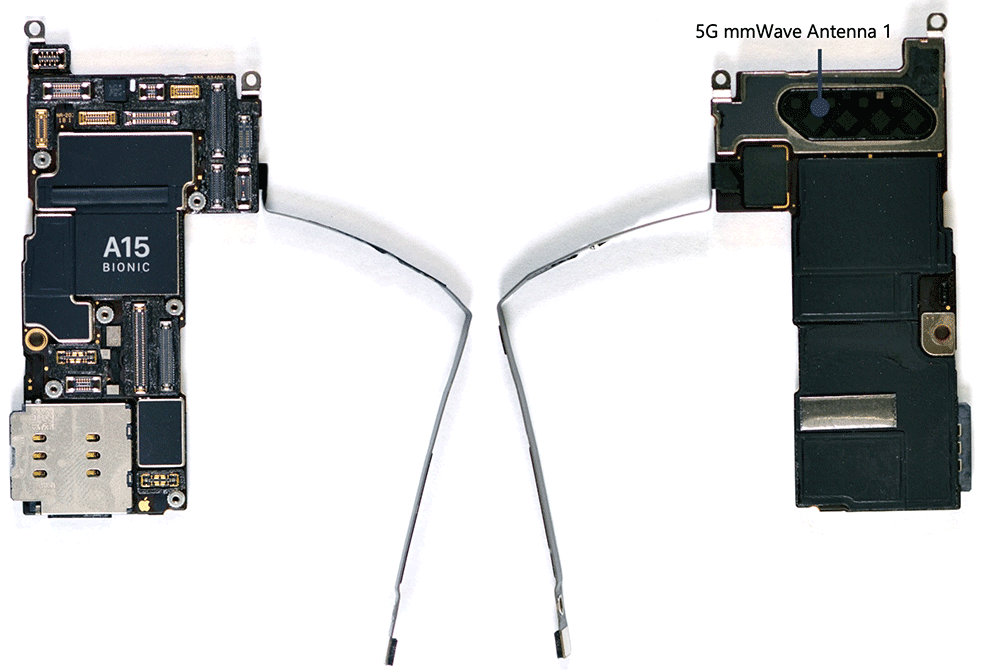 Figure 10: Front-side and back-side of the stacked PCB 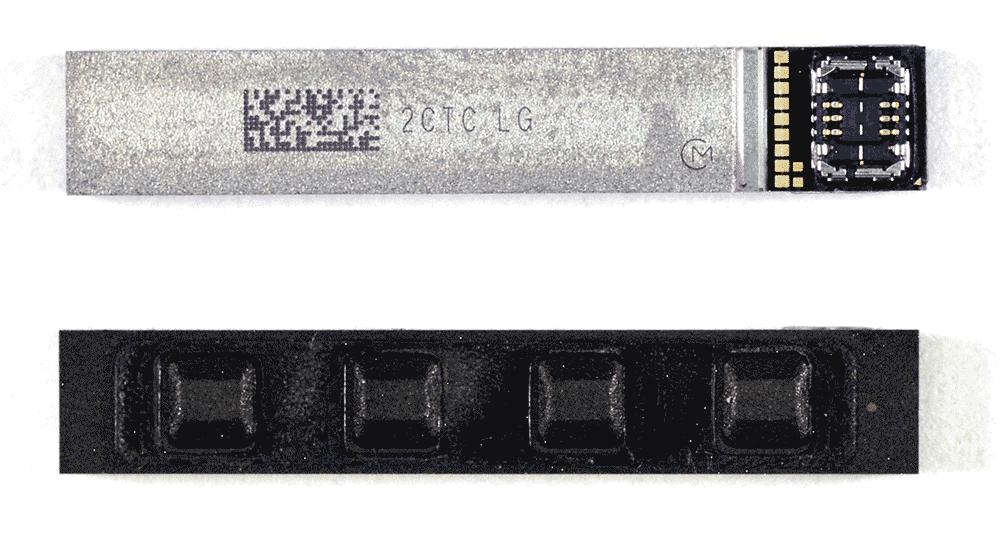 Since, the iPhone 13 Pro Max now supports more 5G bands, the smartphone as expected has several new RF Front End Modules (FEM) for 5G NR (sub 6 GHz, FR1), along with LTE and legacy RATs. The iPhone 13 includes FEMs from Avago (Broadcom), Skyworks, Qorvo, Murata etc. The identified list of RFFEM components include Avago (Broadcom) AFEM-8214 front end module which is likely an upgrade from the Avago AFEM-8200 present in the iPhone 12 Pro Max. Further, Skyworks’ SKY5 series RFFEMs for 5G NR includes SKY58270. The RFFEMs from Qorvo and Murata can also be seen on the PCBs. Further, it should be noted that the iPhone 13 models from different geographies are likely to have different RFFEMs due to the differences in the 5G frequency band support. However, the RFFEMs across the iPhone models in the same geography are expected to remain the same. Same as last year, Qualcomm’s QET5100 envelope tracking modules were also identified on the PCB. We will know more about these RFFEMs and their integrated circuit designs during our further detailed analysis. 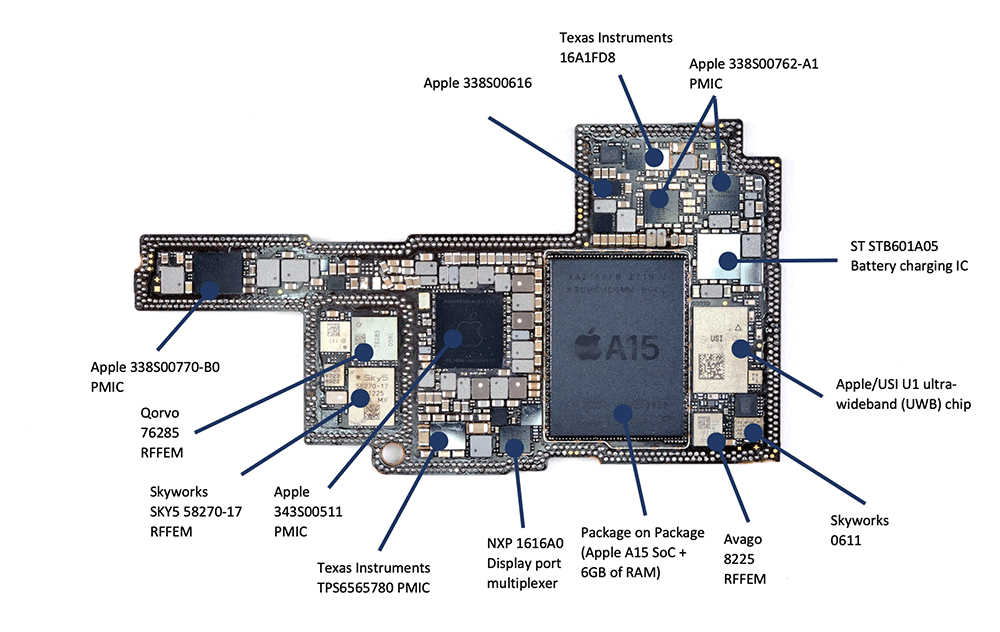 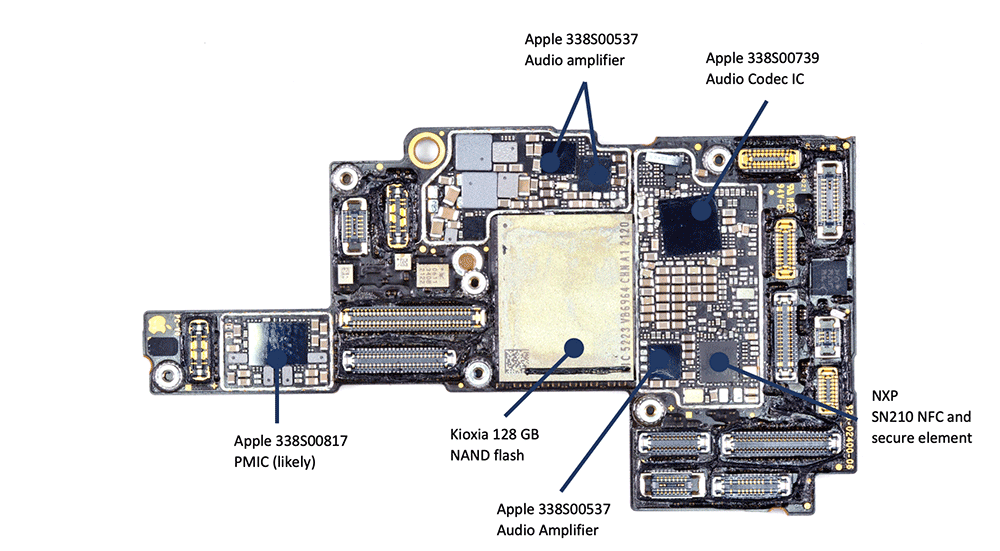 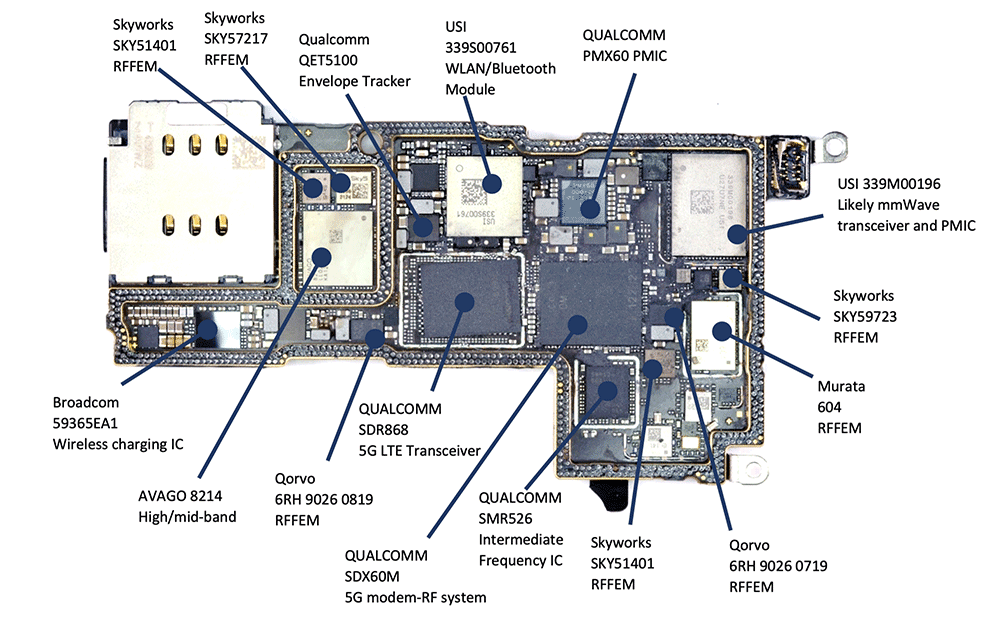 The new iPhone 13 lineup features MagSafe charging which Apple first introduced with the iPhone 12 lineup. There were speculations of Apple implementing stronger magnets with the 2021 line up, however our teardown of iPhone 13 Pro Max revealed similar magnets as compared to the ones used on iPhone 12 series. 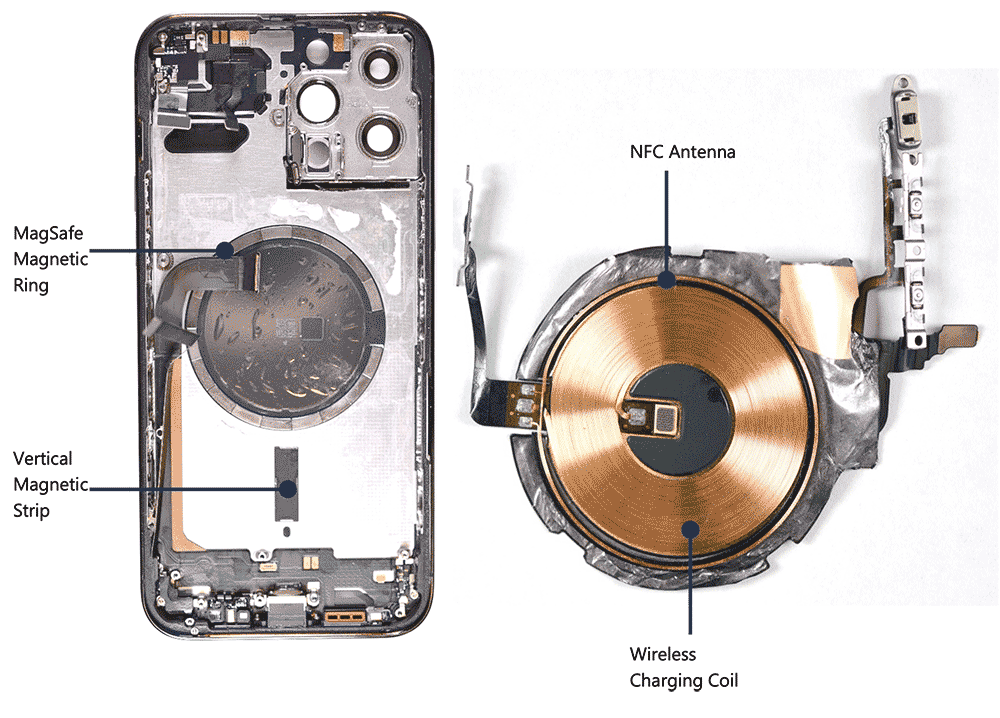 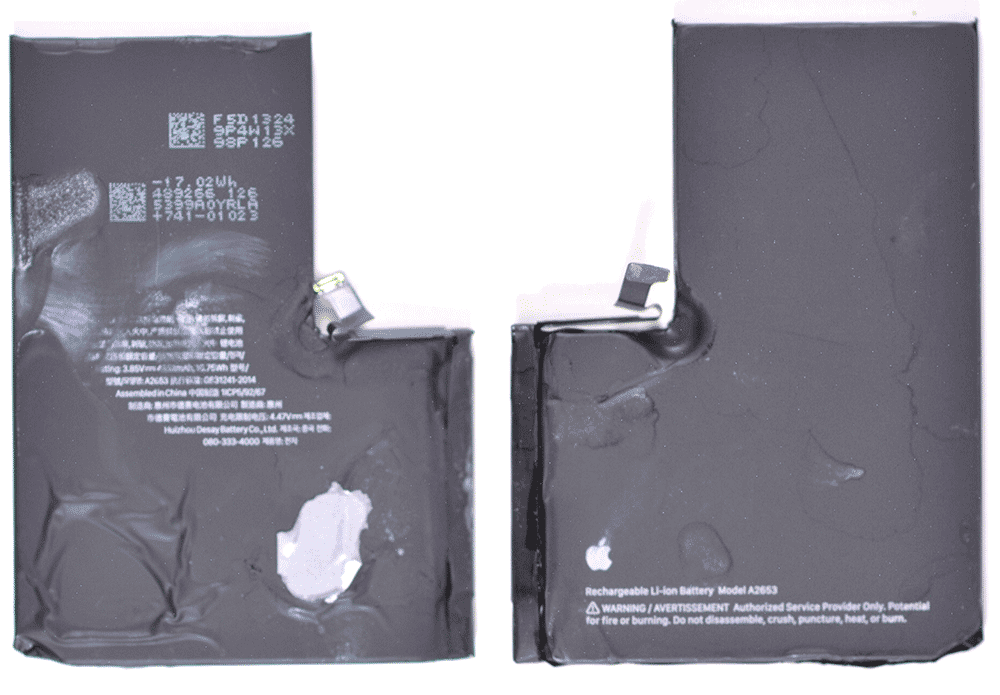 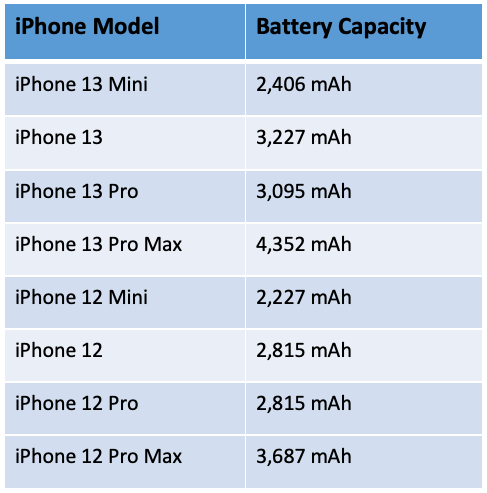 The display of iPhone 13 series also features Ceramic Shield introduced by Apple on the iPhone 12 lineup which is a cover glass that has nano-ceramic crystals infused into the front-glass of the iPhone to improve its durability. 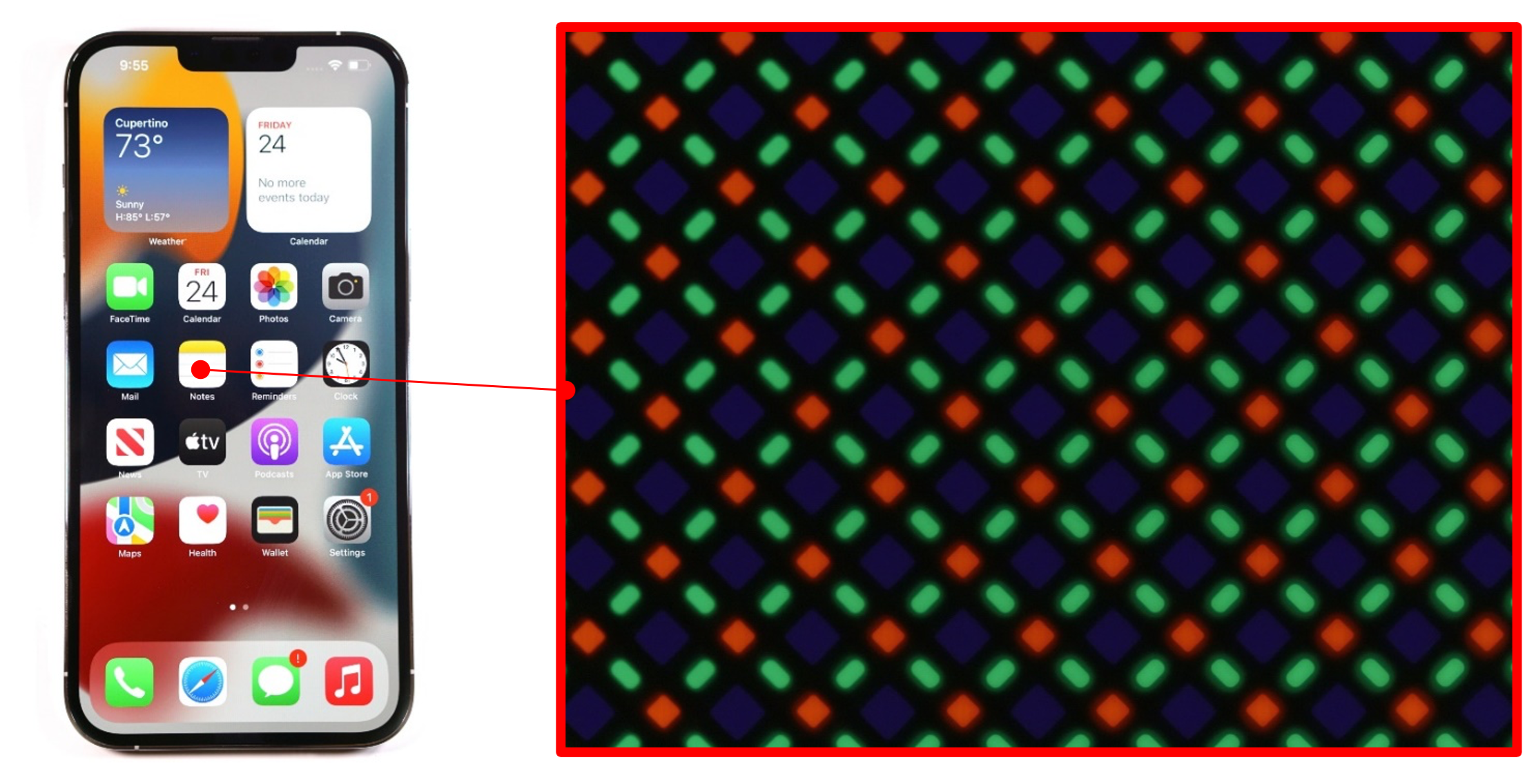 Figure 16: Pixel layout of the OLED screen of the iPhone 13 Pro Max

In the meantime, check out our teardown of the iPhone 12 Pro Max to see the previous changes made to Apple's prior model, not highlighted in this report.